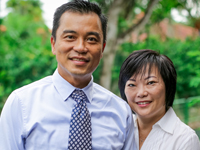 Aaron came to the Lord in 1982 through Lydia who invited him to a gospel rally. In October 2001, they moved over to RiverLife Church after receiving a clear direction from God. They started serving in the Mandarin service and became part of the core leadership team. Now, they serve in the English Adult Intercessory and Worship Ministry. The couple enjoys ministering to the Lord and spending time in prophetic worship.

Aaron has been running his own engineering and manufacturing business for the past 25 years, while Lydia is a homemaker. Their son, Lemuel, serves as the assistant overseer of the MegaLife cell ministry, and their daughter, Amanda, leads the dance ministry. Serving in RiverLife Church has been a wonderful way the family supports one another through ministry.

Aaron believes that RiverLife Church is in an exciting season of building solid foundations in the lives of our members. God is getting this church ready for a journey of faith. Through the outpouring of miracles, God will propel RiverLifers to reach out to many who do not know Christ with greater boldness. 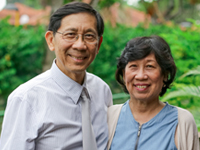 Andrew had the benefit of Christian parents and was sent to Bethesda Katong Sunday School at a young age and accepted Christ as His Lord and Saviour while in Primary Six. He is one of the founding elders of RiverLife Church and a founding member of Bartley Christian Church that planted this local church in Pasir Ris in 1991.

Andrew has served on EFOS and was the Chairman for World Vision (Singapore) and Halogen Foundation. Currently, he chairs the local board of the Regent University Marketplace initiative. Andrew is also a leading motivational speaker, coach and training consultant, and is an adjunct lecturer of Management at NTU.

By calling and vocation, Andrew and Cheh Oon work as honorary editor and managing editor respectively in "Impact" magazine, which is Singapore's only trans-denominational magazine. They are parents of Su-Yen, a medical specialist who is married to Rabind and they have a son, Jaden.

With an early heritage in missions, they are both active in cell, outreach and mission ministry. Cheh Oon serves in the Expectant Mothers' Prayer & Support Ministry, the Cell Connection and Alpha teams. Their lifelong passion is the equipping of the saints to do the ministry — by way of preaching, teaching and writing (Ephesians 4:12,13). 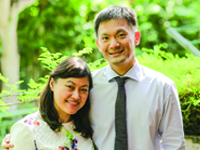 Ee Yang came to faith in 1999 during his junior college days, but it was then only a decision of the mind. In 2001, in the midst of going through a challenging period in his life, God touched Ee Yang’s heart. That life-transforming encounter led him to once again surrender and entrust his life to Jesus.

Ee Yang came to RiverLife in 2002 and served as a cell leader in HighLife when he entered university and went on to serve as an area overseer. After he and his wife, Charmaine, got married, the couple obeyed God’s call to lead a cell of young adults transiting into work life. When the group multiplied, they stepped up as area overseers currently overseeing three cells in ONELife.

A lawyer by profession, Ee Yang pioneered the Faith@Work initiative – a marketplace ministry that seeks to equip and empower believers to live out Kingdom values and cultivate Kingdom culture in their workplaces. He believes that God has called him to unite with other Kingdom-minded professionals to bring about revival in the marketplace.

Ee Yang considers himself to be a son of this house who has inherited many of the Lord’s blessings. He sees the Lord's hand shaping the destiny of RiverLife to be a light shining in the darkness, and to be a blessing to Singapore and the nations. Ee Yang is excited to be part of this mobilisation of the end-time army by God.

Hin Chong came to know Jesus when he was in junior college and accepted Him in 1982. He and his wife, Mui Ling, came to RiverLife in 1991 when they were newly-married and settled down in Pasir Ris.

Having served together as ushers, cell leaders and area overseers of a cluster of cells, Hin Chong and Mui Ling consider ministry a lifelong calling, as well as a continuous learning journey that God is taking them on as a couple. Having been personally impacted by the Alpha course, Hin Chong played an instrumental role in bringing the course into the prisons.

Capitalising on his expertise as a professional banker, Hin Chong serves as Church Treasurer and sees great importance in the church having good corporate governance and effective administration. Mui Ling works in the civil service and serves as a Director on the board of RiverLife Community Services, the community arm of RiverLife Church. Hin Chong and Mui Ling have three children – Benedict, Kendrick and Caitlin.

With a strong conviction to serve in and pray for this House of God, Hin Chong yearns to see RiverLife fulfil her destiny as a missional church. 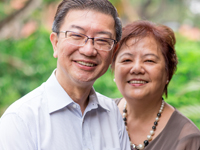 Ricky came to faith in the Lord in 1979 and was baptised in our mother church, Bartley Christian Church. Together with his family and other founding members, Ricky moved over to RiverLife Church in August 1991. Since then, Ricky has grown as he faithfully served as an usher, car park marshal, worship coordinator to a cell leader, area overseer and now church elder.

Ricky and Beng Ho are parents of three lovely children – Michelle, who is married to Marvin Lowe, and sons, Marcus and Marvin. The family worships in RiverLife Church. He is a Director in financial services with Great Eastern Life and works with a committed group of financial advisors. Beng Ho supports him in the area of human resource and administration in the agency’s office.

Ricky is passionate to fulfil the Lord’s commission and he is thankful for God’s grace as he learns to walk daily in intimacy with Him. 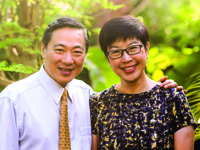 Tat Seng accepted Christ in secondary school when his schoolmate shared the gospel with him. In 1991, he and his family moved from Bartley Christian Church to RiverLife Church and were amongst the 123 founding members.

Over the years, Tat Seng has devoted his time to serve in various ministries and is currently serving as a traffic marshal, area overseer in the Family Adults People Group cell ministry, and a member of the church’s missions committee. Apart from serving alongside Tat Seng in ministry, his wife, Lina also works with him in his business, United Lifestyle. Their son, Daniel, serves in the worship ministry in MegaLife and is a cell leader in HighLife.

Tat Seng believes that we are living in the end times and he is called to be a watchman on the wall to pray for the body of Christ to receive the return of her Bridegroom. His heart yearns to see RiverLife Church becoming lovers of God, a set-apart people who lives the present with eternity in mind.