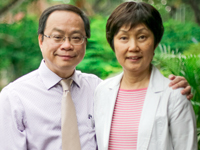 Lionel was a Deacon/Elder of Bartley Christian Church (BCC) for many years. In 1991, Bartley Church sent a group of 123 adults and 75 children to plant a new church in Pasir Ris, and Lionel became one of the three Founding Elders of RiverLife Church.

Lionel came from a traditional Taoist home and met the Lord Jesus in 1974 when he was an undergrad in Wellington, New Zealand. After he returned home, he worshipped at Bartley Church and grew strongly in faith and service. He started his career as a property valuer in the civil service and worked as a senior manager with a property developer for another 22 years.

In 2002, Lionel took an early retirement and went to Bible College of New Zealand for theological study. In 2006, he returned to be a Pastor at Bartley Church for four years. Thereafter, he was appointed Lead Pastor of RiverLife Church.

Lionel is married to Eunice, whom he met at BCC. Eunice was a teacher-trainer at Child Evangelism Fellowship and headed the children ministry in the early years of RiverLife Church. They have two grown-up children, Ivan and Liz-Ann, who are married to Sarah and Bastiaan respectively. Presently, Eunice spends most of her time caring for their three grandchildren. 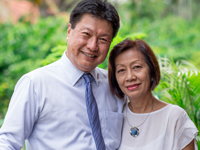 Patrick worked in the building industry for over 30 years and after retiring from full-time work in 2008, he went on to attend Tung Ling Bible College.

Patrick is married to Patricia whom he met in school. She was a Girl Guide and he, a Boy Scout. They have a grown-up son, Gregory. Patricia serves in the Greeting & Ushering Ministry and at the Cell Connection Counter.

Patrick and his family came to faith in 1993 and were baptised in 1996. After his baptism, he went on to serve actively in several ministries – ushering, cell leadership and in the building fund committee. He was also in the Riverlife Kindergarten management committee since year 2000 and has been the chairman for nine years.

His call to full-time ministry came through a prophecy that was released by three anointed teachers, while he was studying in Tung Ling Bible College. Following which, he was approached by Elder Freddy Boey and Pastor Lionel Goh to join the church’s staff team. Realising that it was no coincident, Patrick knew that he had to obey the Lord’s call.

Patrick’s passion is to see people coming to know the Lord, and to disciple them to grow in their relationship with God. His main giftings in ministry are exhortation and evangelism. 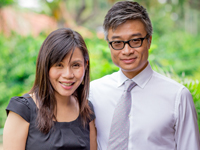 Sarah was brought up in a Christian home in small town Muar in Johore, Malaysia. At age 12, she personally encountered God and had a life transforming Holy Spirit experience in a church meeting.

From1989 to 1993, Sarah lived in Melbourne, Australia and completed a year of matriculation followed by four years of undergraduate studies in Monash University. There, she met her husband, Bill, while serving as leaders in the Overseas Christian Fellowship. Bill is from Hong Kong and was also undergoing his undergraduate studies at that time. After a year of courtship and while they were still in their early 20s, Sarah and Bill married in 1994 and settled in Singapore.

Sarah actively served in the worship ministry and continued to do so after settling into RiverLife Church in the initial years. At the same time, she supported Bill who served as a cell leader and later, an area overseer.

In recent years, Sarah has been more involved in pastoral oversight work especially with our youths and young adults and she continues to be heavily involved in senior leadership work. Sarah and Bill believe in preparing the church for end-time revival and they feel called to focus on raising spiritual fathers (and mothers) for the fathering work that is ahead. They also believe that what is to come is unprecedented so the church must stay current in their walk with God in order to accurately prepare for the coming time.

By God’s grace, their twin daughters, Hannah and Tammy have also caught their hearts for the Kingdom and are equally committed to the spiritual labour that is ahead.